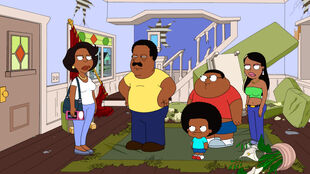 Cleveland is mad at Donna when she's late with dinner.

Yemen Party
Cleveland dresses up as a woman to infiltrate Donna's support group.


Plot: When Donna joins a women's support group and starts to complain about how Cleveland treats her, she gives Cleveland a list of chores to help out around the house. Telling the guys at The Broken Stool, Cleveland finds out that all of the girls are sharing their thoughts on the guys. Deciding to infiltrate the group, Cleveland gets the idea to dress up in a burqua and pass himself off as a Muslim woman named Fatima. After spreading a tale of woe about “her” husband and family to convince the girls to appreciate what they have, they decides to help out Fatima by sending “her” to Yemen to reunite with her family. Cleveland soon finds himself in the palace of a sheik where he is forced to clean and do housework. Cleveland soon finds out what things are like in Donna's shoes and escapes for home where he expresses his appreciation of Donna, although he still refuses to help with dinner. 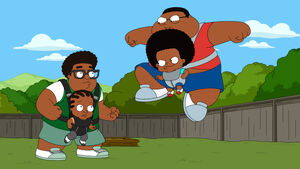 Meanwhile, When Rallo decides to jump around on Cleveland Jr.'s bed, Jr. settles him down by placing him in Larry the Leopard's baby carrier. When Rallo awakes, he discovers he can control Cleveland Jr.'s movements while in a baby carrier at the store. Rallo gets the idea for them to join forces to stop the playground bully, Rodney King. Rodney decides to turn the tables by employing his own oversized brother in the same manner. The four battle until both older brothers are knocked senseless and Rallo and Rodney decides to become friends.