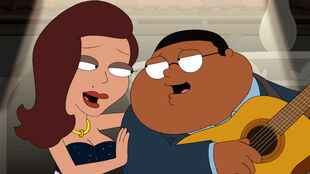 
Plot: Cleveland is bothered when Junior takes him out to the movies instead of a real date which is aggravated when he sees other kids out on real dates. Cleveland tries to push Junior into asking out Whitney but Junior only succeeds in scaring her. Out for a meal at a Mexican restaurant, Cleveland spots a chubby waitress and encourages Junior to go speak to her and they hit it off. Later, Junior comes in announcing he is in love and Cecilia's family has invited them all to dinner which pleases Cleveland. 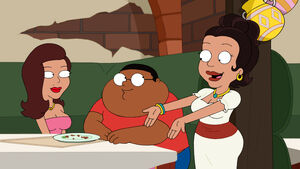 While waiting to meet Junior's date, Cleveland and the family is surprised to find Cecilia isn't the chubby server he saw but her smoking hot cousin. As the meal progresses, Cecilia and Junior continue to flirt to the family's disbelief. Cecilia's Aunt Choni invites everyone to a big party for the happy couple. At The Broken Stool, the guys start to tease Cleveland about Junior's new girlfriend until she arrives and they also cannot believe their eyes. However, then she leaves with Junior, the guys tell Cleveland that his son has managed to top him by getting a hotter looking girl. Cleveland tries to protest the age difference but Holt digitally enhances a photo he snapped of Cecilia to prove she'll still be better looking than Donna at age 42. Cleveland invites Junior and Cecilia out on a double date with him and Donna where Donna proceeds to stuff herself to Cleveland's embarrassment. To top it off, the young couple sing a Spanish duet of love and Cleveland meets his boyhood hero Johnny Bench who also notes that Cecilia is hotter than Donna. Back at the Stool, the guys still can't get over Cecilia but Cleveland starts to get suspicious of her motives and decides to investigate further at the party Choni is throwing for the couple. 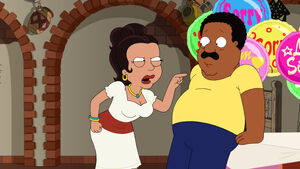 At the party, things go smooth until immigration arrives with a warrant for Cecilia. Donna is shocked that Cleveland would call immigration but he denies this and Choni also lays into him. Cecilia pulls Junior aside and tells him she has to leave but Junior insists on going with her, leaving his parents behind who wonder where he could be. When Cleveland and Donna arrive home, Lester reveals it was him who called immigration. But when they enter the house, they find Junior and Cecilia not only there but they had gotten married to prevent Cecilia's deportation. As Junior packs his things to move in with Cecilia, Cleveland tries to talk some sense into him by reminding him that he is only 14. Junior blames Lester's calling immigration on his father's big mouth and leaves. At Cecilia's apartment, Junior worries about his first night out, let alone with a girl. Cecilia comes out in an alluring nightie but when she finds Junior shivering in fright, realizes he is still just a 14 year old child and agrees to put on some sweat pants and just make a tray of brownies. The next day as Junior works at the restaurant, his parents arrive with a bouquet of balloons. Junior swallows his glee insisting that he is staying with Cecilia and Cleveland tells him that she asked them to take him home. Junior doesn't believe it until Cecilia confirms it and admits they are both too young. Cleveland pushes things by calling their marriage a sham and Choni intercedes, not happy that Cleveland isn't buying into Cecilia honestly being in love with Junior. Cecilia shows them a picture that proves Junior is the spitting image of her father. As Cecilia worries about them being separated permanently, Junior proposes they stay married to prevent her deportation and see about continuing the relationship at a later date. As Cecilia kisses him and walks away, Junior stares and announces he wants to have sex with his wife, Cleveland questions his knowledge but Junior graphically describes a sex act which shocks Cleveland.