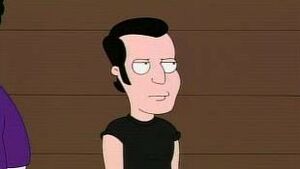 Wowzer is a troubled teenager and part of the Crazy Eights in "Our Gang". He is a parody of "bad boys" from musicals such as Grease and West Side Story and more directly 'Bowzer', formerly of the musical group Sha Na Na, singing in a doo-wop style before most of what he says.

He is voiced by John Viener.

Retrieved from "https://cleveland.fandom.com/wiki/Wowzer?oldid=18572"
Community content is available under CC-BY-SA unless otherwise noted.