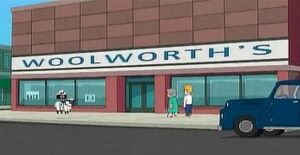 The F. W. Woolworth Company (often referred to as Woolworth's or Woolworth or even Woolsworth) was a retail company that was one of the original American five-and-dime stores. The chain went out of business in January 1997, when the company decided to focus on the Foot Locker division. By 2001, the company focused exclusively on the sporting goods market, changing its name to the present Foot Locker Inc.

In the Internet Leaked Pilot, on arriving in Stoolbend, Cleveland and Cleveland Brown Jr. pass a Woolworth and there is a joke about someone forgetting to tell them they were out of business. This scene was cut in the broadcast version of the Pilot, but Roberta Tubbs does take Donna to Woolworth's to pick out Joan Parakeet.

In "Ain't Nothin' But Mutton Bustin'", after finding out that his favorite sheep Barnaby was destined for meat processing, Rallo and Barnaby escape from a county fair and find themselves in town. Stopping at a Woolworth's because it sounded friendly to sheep, Rallo finds they have stopped in a bad neighborhood after another sheep is killed in the parking lot and see another one robbed.

A Woolworth's sits next to an Aztec pyramid in old St. Oolbend in "There Goes El Neighborhood".

Donna gives Rallo some money in Woolworth's in "American Prankster" which he decides to use to buy a can of fake snakes novelty gag and uses it to prank Cleveland.

Retrieved from "https://cleveland.fandom.com/wiki/Woolworth%27s?oldid=29330"
Community content is available under CC-BY-SA unless otherwise noted.