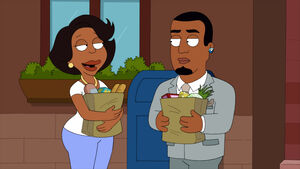 Willy Nilly is a Hollywood producer that sees Rallo and Cleveland Brown Jr.'s music video of Cleveland in "Frapp Attack!" and comes to Stoolbend to make him a star. But when Donna forbids Cleveland from going, Willy Nilly tries to win her over and ends up deciding that he likes the small-town life and stays with the intention of taking Donna away from Cleveland and buys Holt's house to move in next door. Cleveland tries to make Donna jealous back but realizes he can't keep it up. When Cleveland realizes just how bad his life stinks he decides to give Willy Nilly exactly what he wants; Cleveland's life and proceeds to show him exactly what he does for Donna. Willy Nilly becomes horrified and offers to take Donna back to his own life until he gets a look at her without her makeup and returns to Hollywood alone.

Willy appears as one of the German officers in "Wide World of Cleveland Show".

Retrieved from "https://cleveland.fandom.com/wiki/Willy_Nilly?oldid=29839"
Community content is available under CC-BY-SA unless otherwise noted.