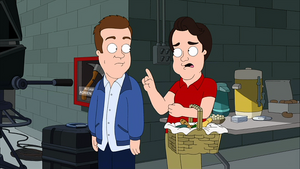 Will Forte is an actor and comedian. From 2002 to 2010, he has been a cast member of Saturday Night Live. Forte also provided his voice for Martin Serious on Grand Theft Auto IV: The Lost and Damned.

He provides the voice of Principal Wally Farquhare on The Cleveland Show. He also appeared as himself in "Once Upon a Tyne in New York".

Retrieved from "https://cleveland.fandom.com/wiki/Will_Forte?oldid=29472"
Community content is available under CC-BY-SA unless otherwise noted.