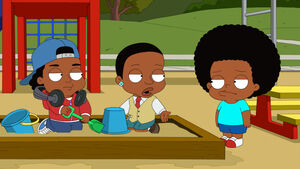 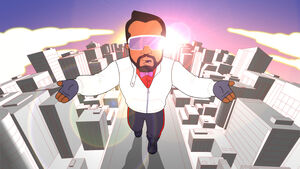 William James Adams, Jr. (born March 15, 1975), better known by his stage name "Will.i.am", is a hip-hop artist and, along with Stacy Ferguson, a member of the Black Eyed Peas.

He has a recurring role as Bernard, a member of Rallo's entourage.

He also appears as himself in"Menace II Secret Society" as part of a Rap Illuminati that ask Cleveland Brown to help destroy Kenny West's career when he becomes too pushy even for them. Cleveland gets Kenny to incorporate polka music into his show where it becomes a hit and the Rap Illuminati break up.

Retrieved from "https://cleveland.fandom.com/wiki/Will.i.am?oldid=24308"
Community content is available under CC-BY-SA unless otherwise noted.