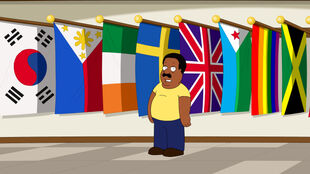 Wide World of Cleveland Show
An anthology of short tales spanning the globe. 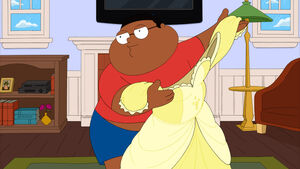 Cleveland explains that with the show's worldwide popularity, some shows are directed towards local tastes and themes.

In a Mexican themed segment, after Donna finds a dress and accuses Cleveland of cheating, Junior admits its his and insists on having a Quinceanera, even though he's a boy. Following a commercial featuring Consuela, Cleveland dismisses the idea, Cecilia and her aunts Choni and Sofia Vergara offer support as Cleveland gives in. Cleveland follows the segment with his catch phrases from other countries. 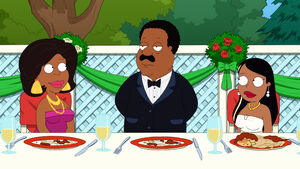 In Italy, Cleveland must choose between Rallo and Jr. as his mob family's successor when he faces trial for murder and racketeering. When Cleveland chooses Rallo over Junior, Junior appeals to his father and kills Holt to prove he has what it takes to lead the family mob. When Cleveland tells him to settle things with his brother, he plants a bomb in Rallo's big wheel but Walt is accidentally killed instead. In revenge, Rallo drowns Larry the Leopard in the bathtub. When the boys take their argument to Cleveland, he tells them both to get into the car and to their horror takes them into the woods. Drawing a gun, the camera pans back as a shot is fired and Cleveland freaks out at the television, not knowing who was shot. 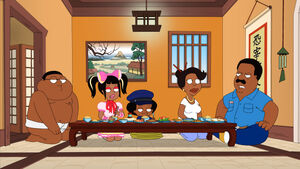 In Germany, a parody of an internet meme has Cleveland as Hitler, finding out that his writers are mostly Jewish homosexuals.

Lastly in Japan, Cleveland wants to bring more honor to his family so he announces his intention to work an extra eight hours at the office. But when he is reminded of Junior's eating contest and would lose honor if he misses it, he builds a robot to attend Junior's eating competition and goes to work. At the contest, Junior wins and is happy to see his dad, but becomes disappointed when he discovers it is a fake. When the robot tries to appeal to him, he is heckled by those in the school and goes on a rampage. At the office, Cleveland starts to work but is distracted by a picture of himself with Junior and leaves to go to the school. As the robot is about to attack Junior and Principal Farquhare, Cleveland arrives and challenges it to a fight where he shuts it off and Cleveland bonds with his son.