Who Done Did It? 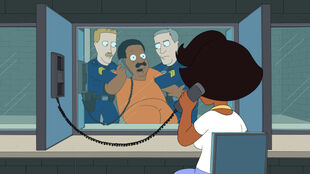 Things are not looking well for Cleveland.

Who Done Did It?
Cleveland is accused of a murder he didn't commit. 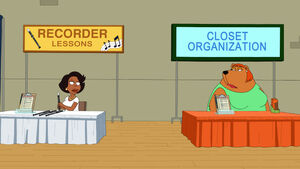 After the episode is introduced by Junior, the family attends a silent auction. Junior discovers that Freight Train poses as a female mystery writer and bids to win writing lessons. Donna and her recorder lessons wars insulted by Arianna while Mrs. Stapleton and Mrs. Waterman get into a bidding war over Arianna's closet organizing. Arianna and Donna's conflict escalates into a full-fledged fight but when Cleveland gets home to walk Rock Hudson, he decides to avenge Donna by egging Arianna's house. Donna is surprised but pleased and suggests that Wally needs a little payback as well. Cleveland gives Wally the egging of a lifetime. Donna next sends Cleveland out to take revenge on Mrs. Waterman for taking her parking space. But when Cleveland lets loose with his egg, striking Lydia, she drops over dead in front of a maid and Mr. Waterman. Cleveland returns home and tells Donna of what happened. Watching the news, they find that they do not know who pitched the egg but Donna and Cleveland suspect that he used one of the hard boiled eggs. At first they consider calling the police but decides to just keep quiet instead. But at work, Cleveland blurts out what happened.

Freight Train explains the work of writing a mystery. Rallo and Junior try to come up with their own mystery but Freight Train keeps shooting them down. Trying to get ideas, they pull out Freight Train's latest novel and find it is blank with Freight Train afraid that his writing has dried up. 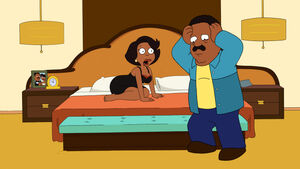 With Cleveland away, the family prepare to live without him. Freight Train bursts in and insists that Cleveland couldn't have done it and proves it by throwing an egg like Cleveland, barely hitting Kendra. They then head to the morgue to look over Lydia. Cleveland finds himself with a familiar face in prison, a man he helped send away. At the morgue, they slip into back and find that she died of an allergic reaction. Using Junior's sense of taste and smell, they find that Mrs. Stapleton's peanut brittle was the cause of death although she has an alibi. However, they find her supply of peanut brittle depleted and discover footprints of small feet, matching Mr. Waterman's. Bursting into the funeral, they confront Mr. Waterman who denies the allegations and insists that he is allergic as well. Freight Train splashes peanut oil on Mr. Waterman and he collapses. But on the way to the hospital, he recovers and proclaims that he got away with it to the coroner who happened to be his gay lover. However, they are heard and recorded by Donna and the family leading to Cleveland's freedom, which they forget to do until a year later.

Previous Episode /// Who Done Did It? \\\ Next Episode