When a Man (or a Freight Train) Loves His Cookie 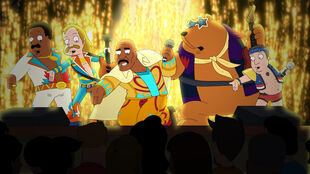 Standing in for George Clinton and the P-Funk All-Stars

When a Man (or a Freight Train) Loves His Cookie
When Cleveland's mom runs away with George Clinton, Freight Train and Cleveland go to find her. 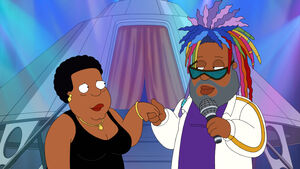 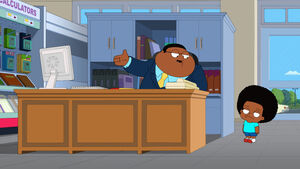 While on a trip to an office supply store, Rallo is bored but Junior is excited to pretend to be an executive at an office display but finds out the display has been sold. Junior decides to hide in the set and finds himself pretending to be a real executive at an insurance agency. Faking his way through a meeting, he actually sparks an idea and is rewarded with his own parking space. But when the president wants him to make an appearance at a company picnic, Junior has to find a family to pose with thanks to the story he concocted. He gets Roberta and Rallo to pose as his family but a family spat in front of the boss does not look good for Junior but his boss actually understands and is supportive. Junior comes clean but the President still thinks he is better than the current employees and offers him a job in the future. Junior asks for and gets to keep his desk until then.