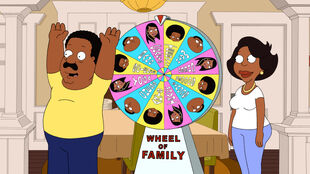 Wheel! Of! Family!
Cleveland and Donna become overwhelmed with the kids' hectic schedules. 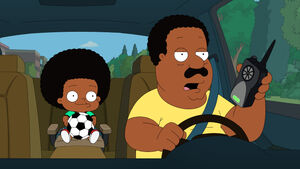 After having to rush around to deliver all of the kids to their activities, Cleveland and Donna find themselves too exhausted and decide to involve the rest of the relation in helping out. Creating a wheel with the kids and their activities, Freight Train finds he is supposed to take Junior to cake class but takes him to the YMCA instead. Robert substitutes for Donna as Rallo's parent and Auntie Momma takes Roberta. Cleveland and Donna finds themselves with time on their hands to relax but Cleveland finds that Robert and Dee Dee have become a couple and rushes back to tell Donna. Donna explodes, leading Cleveland believe that Donna is still in love with Robert although she denies this. She confronts the pair and finds that Robert had a long-time crush on Dee Dee. The kids take time to express their disapproval as well and Donna sends them away, blaming Cleveland. As Cleveland tries to figure out how to fix things, he takes Donna out where they find Robert and Dee Dee. Cleveland confronts them, pretending indignation despite giving them a coupon for dinner and pretends he has fixed the situation. However, Cleveland's speech only serves to push them into adopting a Chinese baby, Quang Quang, to cement their relationship.

Despite the new parents enthusiasm, first Rallo and then Donna both attempt to point out that they are open to giving their respective parents another chance to be part of their live but are ignored. While Donna pleads her case, Quang Quang lets a little fart which amuses both Dee Dee and Cleveland. Dee Dee and Robert ask Cleveland and Donna to be godparents but Donna refuses, stating that she can't believe they would be good parents. Cleveland wants to stand by their side but Donna will have none of it. At the christening, Dee Dee and Robert don't show up and Donna and Cleveland go over to find Dee Dee forgot while Robert was busy taking care of the baby. Dee Dee asks Donna to help her learn how to be a good parent, although they find themselves attending Quang Quang's functions as well. 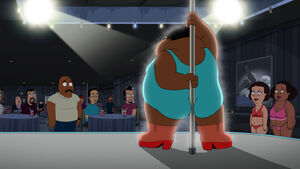 At the YMCA, Freight Train tries to get him into excising but finds he has slipped into a pole dancing class instead and is a hit. Freight Train puts his foot down and takes Junior back to the gym. The other dance class members come to Junior and tell him they need him for the regionals and threaten to quit the class if Junior can't join them and stand up to his grandfather. Freight Train finds out that Junior went to the dance competition. Arriving, he demands that Junior get out of the completion but he refuses, putting on a show and winning over Freight Train.

Retrieved from "https://cleveland.fandom.com/wiki/Wheel!_Of!_Family!?oldid=30795"
Community content is available under CC-BY-SA unless otherwise noted.