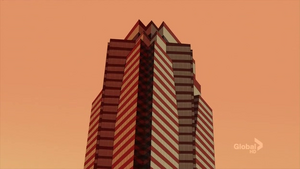 Waterman international is a stand-in for Waterman Cable in "Die Semi-Hard". The building is modeled after FOX Plaza in Los Angeles.

In a parody of Die Hard, thieves posing as terrorists kidnap several employees in order to obtain access to the company vault which contains a 27-inch television billed as the largest in the world. Cleveland Brown rescues the hostages from the roof just before it is blown up by Tim and kills the thieves.

Retrieved from "https://cleveland.fandom.com/wiki/Waterman_International?oldid=19158"
Community content is available under CC-BY-SA unless otherwise noted.