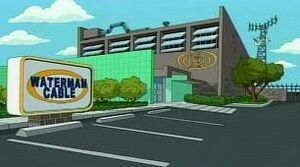 Waterman Cable is a cable company in Stoolbend owned by Mr. Waterman. Their slogan is "We're a monopoly". Its employees include Cleveland Brown, Tim, Terry Kimple, Arch, and Jane. Kenny West also worked here for a short time before his rap career took off.

Every week, an "Employee of the Week" award is given to someone at the company. At least once, this award has consisted of a two-hundred dollar bonus. The company also sponsors the Kiss Cam at Stoolbend Stadium.

"Waterman International" stands in for the cable company in "Die Semi-Hard".

"Watlesan Cabre" is shown as the Japanese version of Waterman Cable in "Wide World of Cleveland Show".

Mr. Waterman needs to lay off employees in "Brownsized".

Waterman Cable flies a black flag in honor of Lydia Waterman in "Who Done Did It?". It is later revealed that she was killed by Mr. Waterman who attempts to frame Cleveland until he is caught by LeVar Brown and the family. This would be the last appearance of Waterman Cable.

Retrieved from "https://cleveland.fandom.com/wiki/Waterman_Cable?oldid=29991"
Community content is available under CC-BY-SA unless otherwise noted.