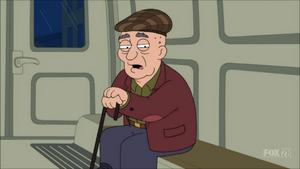 Walter was an elderly gentleman who was being scammed by Hazel in "Sex and the Biddy".

When Rallo Tubbs finds his friend Murray is giving control of his assets to Hazel, he gets suspicious. While spying on Hazel with Cleveland Brown Jr., they discover that Hazel is also fooling around with Walter who gives her a necklace. When they confront Murray and Hazel with their claim, Hazel insists she was just buying the necklace for their wedding. In order to stop the wedding, Rallo and Jr. round up Walter and another gentleman that was also used by Hazel but are given the wrong address to the Shulbend Synagogue and instead are sent to The Blue Oyster gay bar. On the way there, Walter notes that he once got syphilis from a buck-toothed Malaysian prostitute to which Jr. snorts in derision about them being known as the "greatest generation". They arrive at the Synagogue too late to stop the wedding and eventually both Walter and the other elderly gentleman drop over dead.

Walter was voiced by Ed Asner.

Retrieved from "https://cleveland.fandom.com/wiki/Walter?oldid=18788"
Community content is available under CC-BY-SA unless otherwise noted.