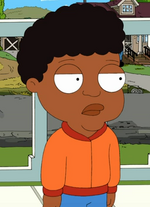 Walt is Shavonne's son and one of Rallo's best friends, along with Julius. He appears to be around the same age as Rallo and has a similar adult-like grasp on the world around him. He often talks with Rallo about problems with his new family, giving him ideas on how to fix things.

In "Harder, Better, Faster, Browner", he goes on a double date with Rallo and Candice West at Formaggio Di Carlo before ditching at the suggestion of his friend.

He hosts a Halloween party with Bernard Bernard and Rallo in "Nightmare on Grace Street".

Rallo replaces him with Rodney King as his best friend in "Yemen Party".

Walt helps Rallo destroy his mother's version of his Thanksgiving Day float and is accused of running Rallo's big wheel "out of gas" after borrowing it in "Turkey Pot Die".

In "California Dreamin'", Gina puts together an elaborate production of stand-ins including Julius and Walt to convince the Brown family that Cleveland has returned home from Los Angeles and they should do the same.

When Roberta finds out that her father Robert Tubbs is dating her grandmother Dee Dee Tubbs in "Wheel! Of! Family!", she shows up with Walt, declaring him to be her new boyfriend since the rest of the family is dating people outside of their age bracket. But when Walt smacks her on the butt, she gives him a time out. When LeVar Brown finds out that Junior went to a pole dancing competition without his approval and wants to know why Roberta didn't stop him, Roberta claims she was out on a date with Walt, noting that at least he pays for things.

Walt is voiced by Al Thompson.