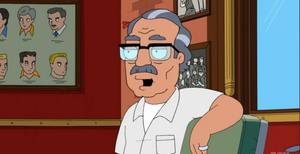 Vinnie is the owner of Vinnie's Barber Shop.

In "To Live and Die in VA", when Donna declares it's time for Rallo to get another haircut he decides it's time to quit getting his cut by his mom in the kitchen and go to a real barbershop. Rallo gets his friend Murray to take him to his barbershop where he soon picks up dirty jokes from the guys. When Donna objects, she forbids him from returning. When Rallo sees Cleveland Jr. styling a doll's hair, he hits on the idea to move the barbershop to their home.

Vinnie is voiced by Fred Tatasciore.

Retrieved from "https://cleveland.fandom.com/wiki/Vinnie?oldid=28981"
Community content is available under CC-BY-SA unless otherwise noted.