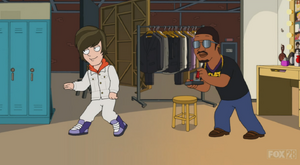 Usher Terry Raymond IV (born October 14, 1978), who performs under the mononym Usher, is an American singer, songwriter, dancer, and actor. Usher rose to fame in the late 1990s with the release of his second album My Way, which spawned his first Billboard Hot 100 number-one hit, "Nice & Slow". His follow-up album, 8701, produced the Billboard Hot 100 number one hits "U Remind Me" and "U Got It Bad".

When Cleveland Brown first hears Justin Bieber sin "Baby" he claims it is a song for girls and Usher in "The Men in Me". Later, Usher is revealed to control a robot Justin Bieber, promising it that one day it will be a real boy.

Retrieved from "https://cleveland.fandom.com/wiki/Usher?oldid=21235"
Community content is available under CC-BY-SA unless otherwise noted.