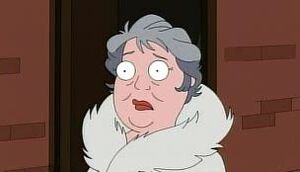 Tyne Daly is an American stage and screen actress, widely known for her work as Detective Lacey in the television series Cagney and Lacey. She won the Tony Award for Best Performance by a Leading Actress in a Musical in Gypsy in 1989.

She appears in "Once Upon a Tyne in New York" as a past love interest for Coach McFall, and has a show at the Winter Garden Theatre in New York City.

Tyne is voiced by Alex Borstein.

Retrieved from "https://cleveland.fandom.com/wiki/Tyne_Daly?oldid=30809"
Community content is available under CC-BY-SA unless otherwise noted.