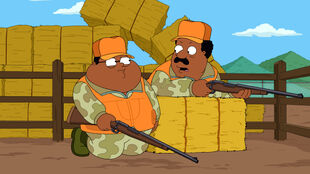 Cleveland takes a reluctant Cleveland, Jr. to a turkey farm in order to teach him how to hunt.

Turkey Pot Die
Cleveland and Junior embark on an elaborate mission to free all of the turkeys before Thanksgiving. 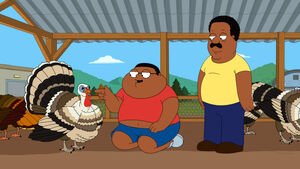 When Cleveland takes Jr. out to pick out their Thanksgiving turkey, Jr. refuses to shoot the bird. Back at The Broken Stool, the guys tease Cleveland for his son's lack of manhood. Cleveland tricks Jr. into going back out to the farm but he refuses to fall for it and won't shoot the turkey. Cleveland decides to do it himself but his confrontation results in him being shot. After waking up in the hospital, Cleveland now knows how it feels to have been shot and decides to help Jr. free the turkeys. The two go on a spree, protesting and attacking people getting ready for their own Thanksgiving. As they protest at Lester's Turkey Hunt, Lester points out that they annoyed everyone so much that the turkeys are all set to be slaughtered Thanksgiving Day. That night they break into the turkey hunt intending to free them all and take them to the Goochland turkey preserve. In order to lead the turkey's out, Jr. pretends to be a turkey and talks the flock into following him. With the help of some of the town, they get the turkeys to their garage to hide out until they can sneak them to Goochland. 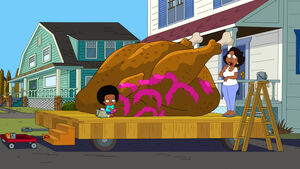 Meanwhile, Rallo and a reluctant Donna sign up to make a float for the Stoolbend Thanksgiving Parade. As Rallo starts to work on the float, Arianna's snide attitude changes Donna's and she jumps into the float building as well. But Rallo's avant-garde design ideas conflict with Donna's traditional ideas. When she finally gets the float to her liking, Rallo enlists his friends to trash the float.

When Donna sees what happened she confronts Rallo. As Cleveland and Jr. try to figure out a way past Lester, they see the float and Jr. stuffs the turkeys inside while Cleveland distracts Lester by flashing. As Donna tries to get supplies to fix up the float to Rallo's liking, he sees it leave with Cleveland and Jr. and figures he's been double-crossed by Donna and rushes to the parade. Lester and Kendra give pursuit and Rallo climbs a parade balloon for a better vantage point to find his float. Donna sees Rallo riding on top of the balloon and panics. As everyone tries to catch up, Lester starts shooting at the birds as they run out of the float. Rallo sees that Donna brought the art supplies but one of Lester's stray shots sends the turkeys flying and they distract the balloon handlers causing the balloon that Rallo is riding to go flying towards power lines. Cleveland takes Lester's gun and shoots the balloon causing Rallo to fall and the turkeys help Rallo's rescue by forming a cushion for his landing and are pardoned by the Mayor. As Cleveland teases Jr. about their Christmas ham he admits he could easily kill a pig as well as a person.