To Live and Die in VA 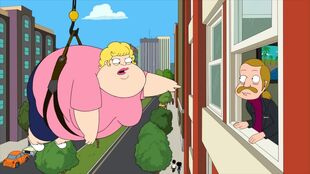 Kendra is at the end of her rope.

To Live and Die in VA
Lester and Kendra lose everything because of Cleveland. 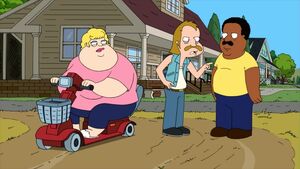 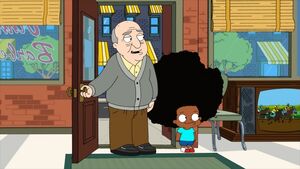 Plot: After another day stuck in traffic, Cleveland hits on the idea of running a beer truck to dispense beer to those waiting in traffic. When Lester hesitates to invest, he decides to take the issue up with Kendra resulting in his being teased by the guys. Kendra shoots him down but he decides to invest their funds anyways. Cleveland's idea, despite earning a great sum, causes a major pile up due to all the drunk driving, which turns into a bust and Lester loses his life savings, resulting in their possessions being foreclosed. When Kendra leaves him to go to her mother's, Lester becomes so upset that he decides to take his own life by driving Cleveland's beer truck over a cliff. After the funeral, Cleveland and Donna offer to let Kendra stay with them temporarily and to their horror she takes them up on it. When Kendra sends Cleveland off to the Fluvanna Center in search of kevlar pantyhose, Cleveland discovers Lester is alive and well. Lester admits he faked his death in an attempt to free himself from Kendra and declares he will never go back.

Getting a crew of movers to hoist Kendra up to Lester's apartment, they confront each other and Lester admits he wanted Kendra to be proud of him for once. Kendra admits she takes him for granted and they agree to patch things up. Just as they make up, the hoist collapses and they are able to sue the movers to return to their life was they knew it.

Meanwhile, when Donna declares it's time for Rallo to get another haircut he decides it's time to quit getting his cut by his mom in the kitchen and go to a real barbershop. Rallo gets his friend Murray to take him to his barbershop where he soon picks up dirty jokes from the guys. When Donna objects to his new found humor, she forbids him from returning. When Rallo sees Cleveland Jr. styling a doll's hair, he hits on the idea to move the barbershop to their home.

While Kendra and Lester are otherwise occupied, Ernie takes up working on a crab boat as on the television show Deadliest Catch and is swept overboard. The episode ends with him enjoying himself out to sea while being circled by sharks.

Previous Episode /// To Live and Die in VA \\\ Next Episode