Tim the Bear is one of Cleveland and Donna's neighbors in Stoolbend that just happens to be a bear. He has deep religious convictions, often attending Stoolbend Community Church and having his honeymoon in Israel in "From Bed to Worse". He lives with his wife Arianna and son Raymond, and works as a telemarketer at Waterman Cable, where Cleveland and Terry work as installers. He becomes Cleveland's drinking buddy at The Broken Stool, where he also converses with Holt and Lester. He apparently smokes in secret, as he asks Cleveland not to tell his wife about it in the "Pilot".

In "Brown History Month", Cleveland stated that Tim's father was a black bear and that his mother was a kangaroo. Tim said in "You're the Best Man, Cleveland Brown" that his father never forgave him for stealing Arianna away from him.

In "California Dreamin'". Gina puts together an elaborate production of stand-ins including a couple of bears from the San Diego Zoo for Tim and Arianna to convince the Brown family that Cleveland has returned home from Los Angeles and they should do the same. 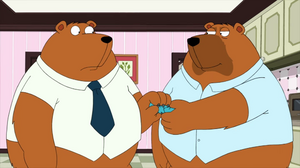 While smoking a cigar with the guys that Dr. Fist stole from his father 20 years previously in "Of Lice and Men", Tim complains that his dad made him get out of the river to poop. They later confront their fathers after getting Cleveland in trouble with LeVar Brown. Tim's father gives him his bow tie to show his approval of the guys standing up to their fathers, but declines to not sleep with Arianna anymore.