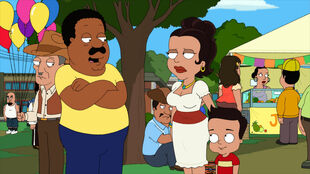 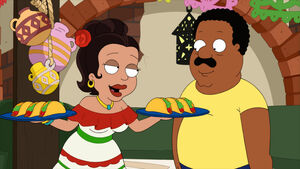 While getting ready for his Superbowl party, Cleveland spots someone crawling through the window of a newly-built mansion across the street, he calls the police. When they arrive, they discover their new neighbor is Choni who forgot her keys. Choni is upset that Cleveland would jump to conclusions and decides to teach him a lesson by upstaging his Superbowl party with one of her own. Cleveland becomes upset but comes to realize that maybe he doesn't know anything about Mexicans and asks Choni to educate him by subjecting him to Mexican culture.

Choni's plan is a success as Cleveland becomes completely enraptured in what he has learned. When Choni's babysitter cancels, she asks Cleveland to fill in for her and he agrees. However, Cleveland loses Marco and brings home the wrong Mexican child. As they search for him, they discover him at a chicken auction where Choni turns out to have much in common with the stereotypes Cleveland believed her to have and Choni turns out to also have many of her own stereotypes about blacks. They both admit they have much to learn about each other but Choni still doesn't like Cleveland. 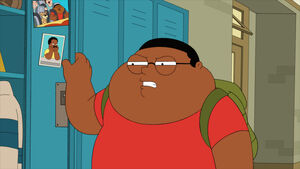 Meanwhile, Cleveland Jr. helps enroll Cecilia into school. To help her become acclimated, he tries to set her up with a date with Tyler Hudson. But when he sees they become too friendly, he intervenes and threatens Tyler. When he finds Cecilia depressed since Tyler didn't show up for their date, he forces Tyler to go out with her but threatens him again if he becomes too friendly.