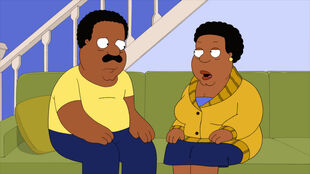 The Way the Cookie Crumbles
After Cleveland learns that his parents have been scammed out of their life savings, he plans to bring down the con man who targeted his mother. 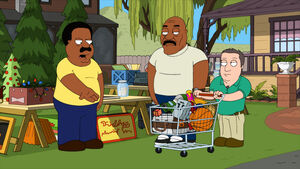 After Cleveland learns that his friends own his old stuff, he confronts his father who is selling his childhood items. Cleveland buys his stuff back but Donna tells Cleveland that there is no room for the items. So he puts it all in a storage area were he finds out his parents are now living there. As it turns out they were selling his stuff because a con artist got to them resulting in them becoming broke. Cleveland then invites them to live in his house, where he has his father worked ragged all the way to his wits end, LeVar then bursts into anger at the dinner table and leaves them. 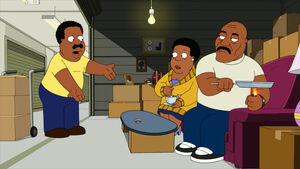 Evelyn reveals she was the one who fell for the scam, she explains that a con artist got her involved in a fake modeling agency. Cleveland apologizes to his father and they come up with a plan to get back at the con artist with the help of Cleveland's friends who dress in drag knowing the con artist's targets are ugly middle aged women, they confront the scam artist at the mall but he immediately sees through them. LeVar angrily beats the con artist, until the con artist buys his way out by offering them a deal involving Rallo. Only to be scammed again.

Previous Episode /// The Way the Cookie Crumbles \\\ Next Episode