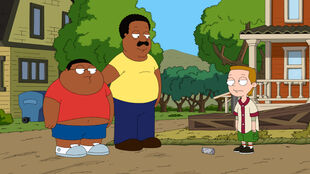 The One About Friends
Cleveland tries to help Cleveland Jr. make friends.

Cleveland notices his son, Cleveland Jr. has no friends, and sets out to find him a good friend. However, trying to find a friend for Cleveland Jr. gets a little difficult. Cleveland finds a kid for his son to play basketball with, but instead the kid throws the basketball at Cleveland, sending him to the ground. Afterwards he runs off with Cleveland's wallet. Another negative setback happens when Cleveland asks another man to play with Cleveland Jr. and is arrested in a police sting operation.

Finally, Cleveland finds out that Lester's son Ernie has no friends, presenting Cleveland with a perfect opportunity to have his son make friends with another friendless child. It goes well, but things take a turn for the worse. Ernie leaves his family and joins the Brown family, much to their dismay. Ernie is unsanitary and disgusting, which pushes Donna to make Cleveland call child services and get Ernie back in his home.

When a child service employee shows up, he brings Ernie back to his family, but instantly takes him away after he finds out how horrific Ernie's home is. Lester finds out that Cleveland called child services on Ernie, which messes up the relationship between the two.

Cleveland decides to get Ernie back, after he finds Cleveland Jr. miserable. Lester takes Cleveland (and some of Lester's redneck buddies) to Ernie's foster home, to get him back. Once there, it turns into a shootout, but the foster parents are armed to the teeth. Most of the rednecks die, but Cleveland manages to kill the foster parents and take back Ernie.

Lester and Cleveland become friends again, and things end happily, despite all the deaths.

Meanwhile, Holt and Tim go to Vegas. Tim has a great time, but Holt seems to be having a less than enjoyable experience.

Previous Episode /// The One About Friends \\\ Next Episode

Retrieved from "https://cleveland.fandom.com/wiki/The_One_About_Friends?oldid=31291"
Community content is available under CC-BY-SA unless otherwise noted.