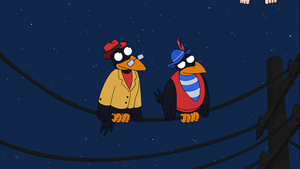 The Jim Crows appear in "Skip Day" as Kendra Krinklesac is being lifted by crane after being knock from her scooter by Rallo Tubbs. As in Dumbo, they remark on never having seen an elephant fly. The show then ends for the commercial break as Cleveland Brown Jr. appears dressed as Tinkerbell for The Wonderfully Racist World of Disney.