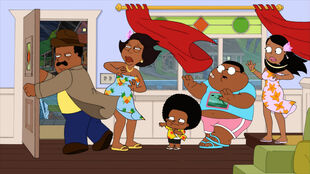 It's a Windy Night

The Hurricane
Part of FOX's Night of the Hurricane with a hurricane affecting all three Seth MacFarlane shows. 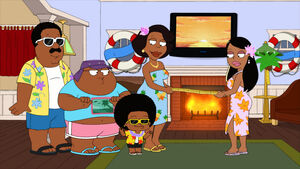 While preparing for a vacation cruise, word comes of a hurricane hitting Stoolbend. As the family rushes to prepare, Cleveland dismisses their concerns. As their cruise is canceled, Cleveland tries to uplift their spirits by hosting their own little cruise inside the house. But when they discover that Cleveland threw away all of the food in the refrigerator and Donna only shops one day at a time, Cleveland tries to go to the store but soon finds out just how strong the winds are.

As the family gathers together to pray for deliverance from the storm, Cleveland notices that Jr. isn't present. When they inquire why he is sitting without joining them, he reveals that he no longer believes in God after his mother Loretta told him that God forgave her for cheating on Cleveland. Cleveland tries to come to grips with understanding Jr.'s exact position, considering him an Atheist, Jr. explains that Atheism is also a religion that he considers even worse than Christianity and uses Brian Griffin as an example. Jr. asks why they never go to church and yet Donna has such strong convictions about not attending church and she responds that its simply because she's a black woman in the south. After Jr. goes back to his room, Rallo tries to convince him that he is wrong but fails. Cleveland tries an intervention involving the entire family but they fail. 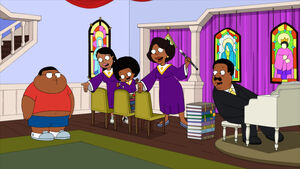 As the family searches for more food, they notice Jr. missing. Rushing to his room, they find him with a supply of food. Accusing him of hording food for himself, he explains about being prepared for the storm to feed everyone as he was the only one who watched the news. However, their accusations upset him and he locks the food away and suggests they should pray for food. When Cleveland tries to order God's wrath on Jr., a tree fall through the roof, pinning Cleveland to the floor. When the family tries to lift it off of him, the spurn Jr.'s offer to help, suggesting the tree falling was his fault. When they fail to get the tree off of Cleveland, they admit its in God's hands which brings more ridicule from Jr. As Donna and Jr. start to argue again, Jr. refuses to believe in something he can't see. Donna uses this combined with the story of Star Wars with Han Solo not being able to see The Force but not treating Luke Skywalker as an idiot. Donna explains about believing in something bigger than herself, drawing reluctant agreement from Jr.. When the tree shifts, pinning Cleveland further, the family starts to pray. As the tree suddenly starts to shift, freeing Cleveland, Jr. is seen using his weight to leverage the tree from outside the house. When the family gives thanks to God for Cleveland's deliverance, Jr. tries to point out that he just applied basic engineering he learned in school. Cleveland and Jr. continue to argue over who should get the credit until Jr. leaves in frustration.

Previous Episode /// The Hurricane \\\ Next Episode