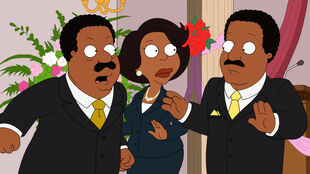 The Hangover Part Tubbs
Donna runs for the school board. 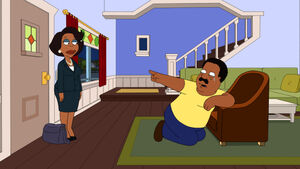 Donna is running for the school board after sixteen years of waiting for an opening. When Cleveland embarrasses her in the yard, Donna asks him to behave himself until the election is over. While playing the Hurt Locker game with his friends, he accidentally kills new guy Franklin. Drinking with the guys later, Cleveland finds out that he wasn't invited to the candidates dinner and rushes to find Donna has replaced him with Ebert Williams to pose as Cleveland so he wouldn't be an embarrassment. When Cleveland introduces himself, Donna has him removed.

At home, Donna tells Cleveland that his dad put her up to it. Donna tells that Cleveland wants to fire her imposter but after considering her future decides to keep her fake husband. She tells Cleveland that she is keeping her her actor as Cleveland asks her what has happened to her over the years as she used to be fun. After challenging her to drink a beer, Donna decides to have one. As the drunken guys and Donna wake up, they find they are in Richmond during a NASCAR race and Donna needs to get to her debate in four hours. 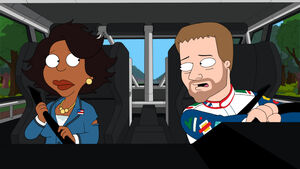 After a flashback of the previous night, Cleveland runs out on the track and stops the race, getting Tony and Dale Jr. to get the two of them back to Stoolbend. Stopping for gas, the guys seem lost until Donna becomes a one-woman pit crew and get them moving and she arrives on time. Donna is still hesitant to go in mussed but Cleveland get her cleaned up and decides to stay outside so she can appear with Ebert Williams but she introduces Cleveland as her real husband and comes clean for the debate.

In school, Junior manages to skip PE by forgetting his gym clothes and Principal Wally insists he join a sport to pass. Trying out for diving, he surpasses expectations and makes the team but finds out the uniform is a speedo. Junior tries to avoid the coach after dodging practice but is caught. Junior vows to quit the school rather than be seen in the speedo and tries his hand at being a Mexican laborer, but when the guys strip down to their thong underwear, he bolts. 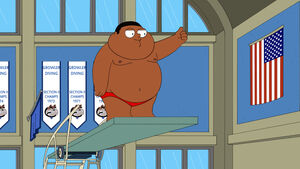 Junior hears Donna's school debate speech and vows to do his best as well, helping the school win the match as the coach is arrested after being identified by one of the divers. Donna loses the election but the show ends hinting at a cliffhanger episode, with Donna still losing but FOX asking for everyone to tune in anyways and pretend they hadn't seen it.