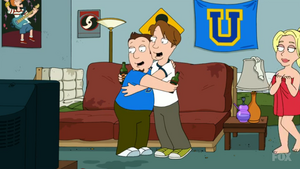 The Guys from the University of Delaware are two typical stoners who are presumably watching the show from the campus room.

In "Cleveland's Angels", they comment on the predictability of the show but jump for joy when they get a shout-out during the broadcast.

In "Beer Walk!", they comment on the device of introducing Donna's charity work out of the blue. Later, they are overjoyed that Donna goes back to take care of her charity, they dismiss a request to judge a showering contest between two co-eds because they are watching the show.

Retrieved from "https://cleveland.fandom.com/wiki/The_Guys_from_the_University_of_Delaware?oldid=31079"
Community content is available under CC-BY-SA unless otherwise noted.