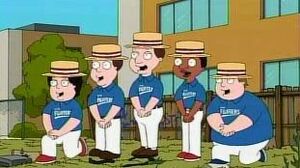 The Fluffers is the a capella glee club at Stoolbend High School. Principal Wally is a large fan of theirs, spending money from the school's budget on them instead of a baseball team and even singing with them during their Christmas peformance. They typically consist of five members of varying heights. They have sung two songs on The Cleveland Show: Gloria at the Stoolbend Community Center and We Built This Ballpark during the construction of Waterman Yards.

Although Wally says that they are an a capella group, they have so far been accompanied by background music.

Retrieved from "https://cleveland.fandom.com/wiki/The_Fluffers?oldid=20712"
Community content is available under CC-BY-SA unless otherwise noted.