The Essence of Cleveland 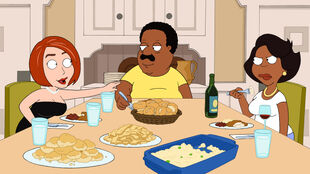 Cleveland is reunited with an old classmate "Fatty Patty"

The Essence of Cleveland
Cleveland is reunited with an old classmate "Fatty Patty", who is now skinny and beautiful and still has a crush on Cleveland. 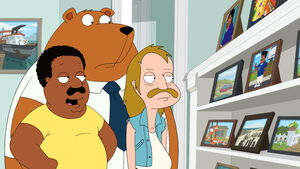 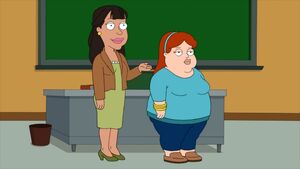 Plot: After a close call with bank robbers, Cleveland discovers that Donna knows very little about him. While killing time with the guys by attending an open house, Cleveland discovers he has a secret admirer. After tricking the real estate agent into revealing the name of the house owner, Cleveland learns it is Patty Donner. When he informs Donna, she is amused to remember that Patty was known as "Fatty Patty" in high school. Despite his disappointment, Cleveland heads off to Patty's to find she had lost a lot of weight and is now sexy. Boding, Patty reveals that Cleveland was the only one who had shown her kindness in high school. Cleveland commiserates on how Donna doesn't known him. At Donna's suggestion, Cleveland invites Patty to dinner where Donna is also shocked at Patty's new appearance. However, after Donna suffers from some not-so subtle insults, Donna forbids Cleveland from seeing her again.

Deciding on some farewell drinks with Patty, Cleveland finds Patty has spiked his drink and knocked him out, taking his "essence" with the intent of conceiving a child from Cleveland. Confessing to Donna what happened, Cleveland deduces that Patty intends to be inseminated in a hot air balloon and gathers the guys to catch up with her. They find Patty in her balloon about to be inseminated by Dr. Fist when Donna arrives and talks sense into Patty by pointing out Cleveland's faults. Cleveland is touched that Donna does know something about him and Patty admits she can do better. Dumping the baster with Cleveland's sperm overboard, it lands in a stream where a fish with a mustache appears.

Previous Episode /// The Essence of Cleveland \\\ Next Episode