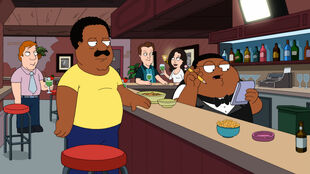 The Curious Case of Jr. Working at the Stool
Cleveland teaches Junior responsibility by challenging him to get a job.


Plot: When Cleveland admires Lester's new hat, Lester mentions that his son Ernie bought it for him with the money he earned on his new job at the slaughterhouse. When Cleveland Jr. asks for a new bike, Cleveland believes it is time for him to learn some responsibility by earning the money himself. Attempts to find work at the slaughterhouse and the local paper fail to pan out. While Cleveland takes Jr. to the The Broken Stool to collect their thoughts. Cleveland Jr.'s compulsion to clean and organize kicks in when he sees the mess around him and he straightens things out in short order. After also impressing Stool bartender Gus with his business acumen, Jr. is hired. Jr. quickly kills Cleveland and the gangs buzz when he reveals that Gus never kept the books on their tab but now he is. Jr. takes things further by expanding the business by enforcing a dress code, replacing American Football with European and chases off the gang when he needs their table for paying customers. Attempts to find an alternate hangout fail so Cleveland decides to get Jr. fired by complaining about him being underage. Jr. recognized the work of his father and plots an elaborate revenge, trimming his mustache over a period of several nights, changing his shirts to a smaller size, reworking the heels on his shoes and replacing the gang's beer with non-alcoholic brew. When Cleveland finally loses that last of his mustache, he goes to see his doctor who tells him that he has Dipliatory Mustachio Alapecia, or DMA for short. The effect of the non-alcoholic beer cause the gang to break into a fight when they find they can't stand each other while sober. Jr. reveals his revenge while the gang are fighting and presents Dr. Fist who was in on the plot. They celebrate the end of the revenge with a round of drink shots. 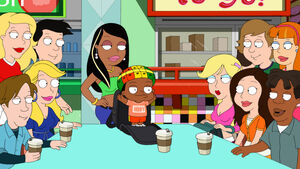 Roberta is in a funk because of being shown up by rich girl Lacey Stapleton and her new dog. After receiving some motherly advice from Donna to show up Lacey, Roberta presents Rallo as her adopted African son. Mrs. Stapleton is so impressed that she invites Roberta to present him at her fund raising benefit for C.H.O.D.E. - "Caucasian Heroes Offering Dollars Everywhere". At the benefit and at a loss of words, Roberta stumbles through her speech, afraid of being found out as a fraud until Rallo appears to steal the spotlight to Roberta's relief.

Previous Episode /// The Curious Case of Jr. Working at the Stool \\\ Next Episode

Retrieved from "https://cleveland.fandom.com/wiki/The_Curious_Case_of_Jr._Working_at_the_Stool?oldid=33212"
Community content is available under CC-BY-SA unless otherwise noted.