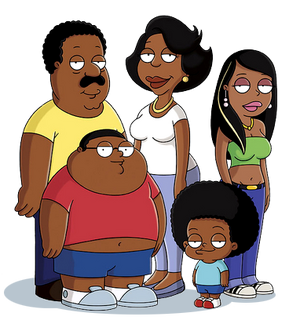 The Cleveland Show is an animated series created by Seth MacFarlane, as a spin-off from Family Guy, also created by Seth MacFarlane. The animated series focuses on the character of Cleveland and his family as he moves from Rhode Island to Virginia. The main characters are Cleveland, Rallo, Donna, Roberta and Cleveland Brown Jr.. According to the DVD commentary for the pilot episode, the show was originally to be called "Black Family Guy".

Many years ago, Cleveland Brown fell in love with Donna. Unfortunately, she married someone else. She promised Cleveland that if it didn't work out, she would come to him. Her man skipped town with another woman, leaving her with a teen daughter and a young son. Donna offers Cleveland a chance to win her over when he stops by the town of Stoolbend with his son Cleveland, Jr.. He now lives with a new step-daughter and step-son and rather strange neighbors, including a loudmouthed redneck couple, a married pair of anthropomorphic woodland bears, and a hipster wannabe.

The end of The Cleveland Show is acknowledged when Cleveland simply walks back onto Family Guy in "He's Bla-ack!" and opens himself up to the humiliation from his friends.