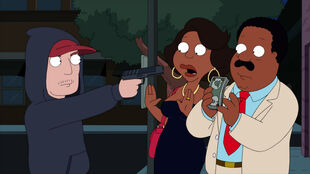 Cleveland and Donna are robbed at an ATM.

The Brown Knight
Cleveland is the hero of the hour. 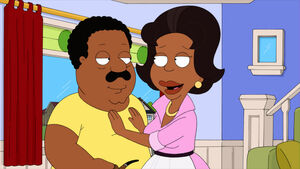 After a stressful day at the school, Donna comes home and is in no mood for Cleveland's shenanigans. At The Broken Stool, the guys tease Cleveland about Donna running things. When he confronts Donna, she admits she had to develop a take-charge attitude to survive being a single mom but agrees to lighten up a little for Cleveland. Cleveland and Donna are robbed at an ATM with the thief taking their money and Donna's wedding ring. While Donna struggles with the thief to protect her ring, Cleveland runs around helplessly. When the thief's gun goes off and Cleveland is shot, Donna feels horrible and agrees to restrain herself more for Cleveland. At the Stool, the guys interpret Cleveland getting shot as him trying to be a hero and Cleveland is the man of the hour until Dan Rather and Tila Tequila discover the truth about Cleveland by playing the ATM camera footage showing Cleveland running around helplessly while Donna fought with the robber. Embarrassed, Cleveland decides he should quit pretending to be a hero and sets out to find the thief and get Donna's wedding ring back. After striking out at a pawn shop and setting up a sting at the ATM he returns home where he finds Cleveland Jr. and Ernie laughing at his video. Cleveland has a burst of inspiration and has Jr. zoom in the video, finding the thief had a "Last Call with Carson Daley" hat and traces him to his house. When Cleveland is captured by the thief, Donna bursts in to the rescue and knocks the thief out cold. After admitting she followed Cleveland all over and that she cannot just sit by and do nothing, she makes it look like Cleveland took out the thief making him a hero again. 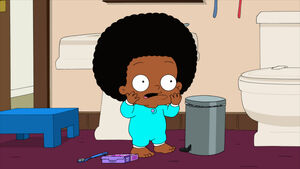 Meanwhile, Roberta sees a pair of $300 jeans she wants. When she asks Donna for the money she is rejected; Rallo admits he has the money but won't give her any. Roberta hints that it is a bad time to mess with her leaving Rallo confused. Later in the bathroom, looking in the trashcan, Rallo is shocked when he thinks Roberta is dying of a terrible disease but it turns out it is only her period. When Rallo comes to her to comfort her, Roberta decides to take advantage of the situation and asks for the money for the jeans she wanted. When Donna finds out that Rallo gave Roberta the money, she tells him that Roberta may be taking advantage of him. When he believes she is being insensitive to Roberta's impending demise and tells her what he found, she enlightens him on what is happening. To get even, Rallo sells all of Roberta's things on Craigslist to get his money back.