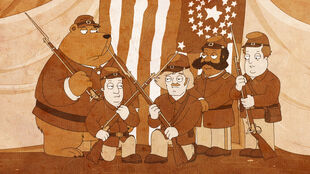 Cleveland and the guys

The Blue And The Gray And The Brown
Cleveland discovers Stoolbend's origins. 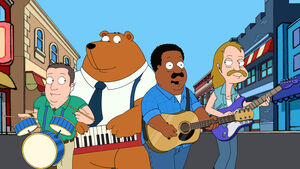 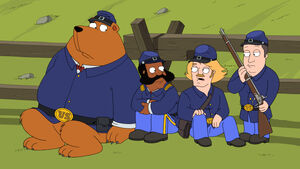 Plot: After attempting to take the family out for a drive-in movie, Cleveland discovers the drive-in is set to be demolished. Cleveland fights to save the town’s drive-in movie theater, winning over the town council with a song. His efforts to preserve the town’s history is noticed by the Stoolbend Preservation Society and he is invited to attend a private dinner party at the home of the great-great-grandson of the town’s founding father, B. Emerson Plunkett V. The society uses Cleveland's enthusiasm to save a park and statue of the town father from being turned into a parking lot, only to find that he has been duped into protecting the legacy of a slaveholder. When he attempts to confront Plunkett, he finds he is in preparation for a civil war reenactment of The Battle of Stoolbend, one of the battles in which the South won. Cleveland and most of his friends vow to turn the tables on Plunkett except for Lester who embraces his Southern heritage. On the battlefield, Cleveland and the guys find the battle isn't going their way so they rush off to the library to find out how the battle turns out. They rush back and take over from Wally Farquhare who is leading the Northern army. Changing the battle plan, they manage to eliminate all of the Southern army except Plunkett. Cleveland fires his pistol but claims to have missed with his blank ammunition. Plunkett fires his blank but Lester leaps in front of the fake bullet, claiming that loyalty and friendship mean more than regional loyalties, not to mention that most of his Southern brethren are rich dipsticks. Cleveland shoots Plunkett which Plunkett claims only hit him in the arm. Cleveland points out that the medical care of the time would likely result in an infection costing Plunkett his life and Plunkett concedes the battle. In the epilogue, Cleveland and the guys got drunk and tore down the statue of the town father, only to be fined for it's replacement, things being what they are in the South.

Retrieved from "https://cleveland.fandom.com/wiki/The_Blue_And_The_Gray_And_The_Brown?oldid=31132"
Community content is available under CC-BY-SA unless otherwise noted.