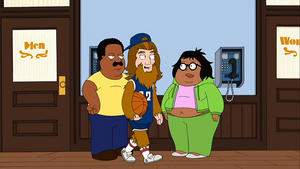 Teen Wolf is an American film released on August 23, 1985 by Atlantic Releasing Corporation starring Michael J. Fox as Scott Howard, a high school student who discovers that his family has an unusual pedigree when he finds himself transforming into a werewolf.

When Cleveland inquires of a disguised Roberta about the comedy school she is attending in "Love Rollercoaster", the Teen Wolf exits from a restroom and says hello on his way off screen.