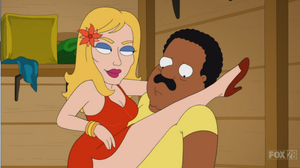 Svetlana is a dancer and possible prostitute that Cleveland Brown picks up in Little Moscow when Donna replaces him for the dance contest in "Dancing with the Stools" with Cleveland Brown Jr.. Cleveland promises to help her get a green card but privately acknowledges to the audience that he is going to renege on the deal. When he introduces her to Donna and his parents, it is revealed that she has a screwdriver scar to the kidney and a muscular back. While working out with her, Svetlana puts the moves on Cleveland and causes him to bolt when things get a little too intense sexually for him.

Svetlana is voiced by Alex Meneses.

Retrieved from "https://cleveland.fandom.com/wiki/Svetlana?oldid=32574"
Community content is available under CC-BY-SA unless otherwise noted.