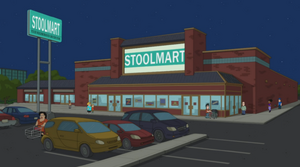 When Cleveland Brown Jr. takes Rallo there during his nap in "Yemen Party". When Rallo spots jars of "Newman's Own blood" at Stoolmart with Paul Newman's ubiquitous face on the label, Rallo discovers he can control Cleveland Jr.'s movements while in a baby carrier at the store. Jr. decides to play along and plugs himself into Rallo in the style of Avatar and they set off in search of Big-Boob June.

Junior and Cleveland Brown protest the killing of turkeys outside of Stoolmart in "Turkey Pot Die".

Retrieved from "https://cleveland.fandom.com/wiki/Stoolmart?oldid=24698"
Community content is available under CC-BY-SA unless otherwise noted.