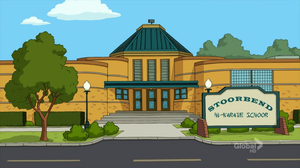 Stoolbend Karate School is the Japanese version of Stoolbend High School shown when Cleveland demonstrates variations to The Cleveland Show made for international audiences in "Wide World of Cleveland Show".

At The Bloken Stoor, Cleveland has to figure out how he can gain honor by both working an extra eight hours on his job at Watlesan Cabre and attending Junior's eating competition at Stoolbend Karate School. He and his friends come up with the idea of building a robot from the karaoke machine. As he sends Clevetron on to the school, he sneaks into the office dressed as a pile of shoes. But as he starts to work, he keeps glancing at a picture of him and his son together and decides to leave work to go to the school. At the school, Junior wins the competition and is pleased at first when he thinks its his dad there, but is disappointed when he realizes its a robot. When Clevetron tries to appeal to him, he is heckled by those in the school and goes on a rampage. As Clevetron is about to attack Junior and Principal Farquhare, Cleveland arrives and challenges it to a fight where he shuts it off and Cleveland bonds with his son.