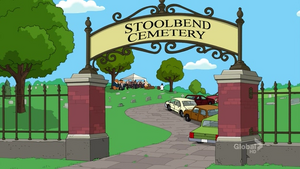 The Stoolbend Cementery is the local cemetery of Stoolbend. This is the cemetery where Loretta Brown's wake took place and where she was subsequently buried in "Gone with the Wind".

In "Like a Boss", Tom is laid to rest after 25 years at Waterman Cable. Cleveland uses the opportunity to try to talk Terry Kimple into taking Tom's supervisor position.

Cleveland has LeVar Brown bury Horsey in the cemetery after it breaks its leg in "The Way the Cookie Crumbles".

After he fakes his death in "To Live and Die in VA", a casket for Lester is buried in the cemetery.

In "Grave Danger", Cleveland and the guys are paid to be mourners at a funeral and soon grow to like being at the cemetery so much they start attending funeral for free. After Holt buys multiple adjoining plots for the guys and their families, Tim declines to be buried with the rest of the gang, citing religious reasons.