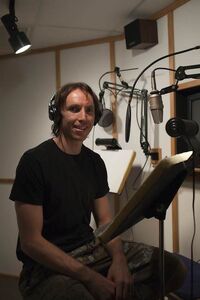 Stephen John Nash, OC, OBC (born 7 February 1974) was at the time of his appearance on The Cleveland Show, a Canadian professional basketball player who played point guard for the Los Angeles Lakers of the National Basketball Association (NBA).

Steve Nash voices himself when Cleveland gets rowdy and talks smack to the players in an all-star basketball game in "A Short Story and a Tall Tale". The basketball champs, feeling hurt, seek revenge by paying a surprise visit to Stoolbend and putting Cleveland in his place.

Retrieved from "https://cleveland.fandom.com/wiki/Steve_Nash?oldid=32263"
Community content is available under CC-BY-SA unless otherwise noted.