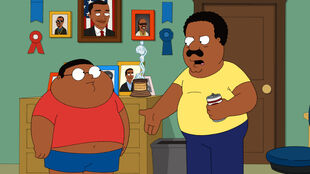 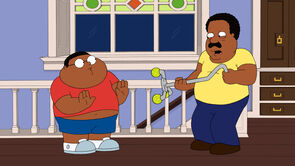 Cleveland is embarrassed when he learns that Cleveland Jr. was the only student to attend school on “skip day”. When he attempts to make Cleveland be more of a man by threatening his stuff leopard Larry, he forces Jr. to knock him out. Shocked at his new ability, Cleveland tries again and again to knock Jr. out and fails. Stuck with the realization that he can no longer beat his son, Cleveland slips into a funk that makes him act older than his years. depressed at seeing his father in such condition, Jr. uses Donna's makeup and spreads a story that Cleveland managed to beat him up. However, the police arrive to arrest Cleveland for child abuse. At the police station, Jr. tries to plead for his father but the police dismiss his story. In desperation, Jr. grabs one of the officer's gun and frees Cleveland and they both escape in a police car with the rest of the police force in pursuit. 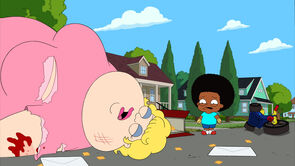 Meanwhile, Rallo gets in a hit-and-run accident with Kendra and her scooter while heading out for a ride on his big wheel. When Lester vows vengeance, Rallo goes to great lengths to dispose of his big wheel. Just when the coast appears clear, Lester spots Holt riding a three-wheel recumbent bicycle and decides that was the person Kendra saw. Lester decides to get even by cutting the brake lines on Holt's bike. When Rallo finds out, he confesses his involvement and they set off to save Holt.

While Holt is headed downhill head on into the police in pursuit of Cleveland and Jr., Kendra launches herself from Lester's pick up truck into Holt's path in order to block his path, saving him. Jr. suddenly realizes its almost time for school and forces Cleveland to take him so he won't miss a day. At the school, Cleveland explains what happened hoping to make amends with the police but is tased for his trouble.