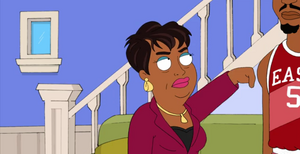 Shirley Garnett is the mother of NBA star Kevin Garnett.

When the NBA players converge on Cleveland at his home in Stoolbend, with the intent of insulting his mother in payback for insulting Kevin Garnett's mother in "A Short Story and a Tall Tale", Kevin starts to insult Cleveland's mother Cookie but Kevin's mother Shirley arrives and demands Kevin apologize for insulting her. Cookie in turn, demands Cleveland apologize to the players.

Retrieved from "https://cleveland.fandom.com/wiki/Shirley_Garnett?oldid=29788"
Community content is available under CC-BY-SA unless otherwise noted.