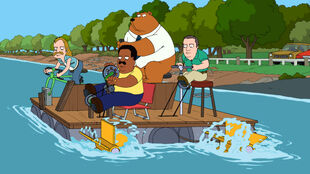 Cleveland and the gang in the Floatboater Race

Ship'rect
Cleveland turns against his friends to race with his hero. 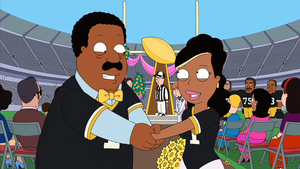 Cleveland and his friends decide to enter the Stoolbend Floaterboat Race in order to win free beer for a year at The Broken Stool. But when Terry and Cleveland go off to perform a cable installation, they find they are installing for Cleveland's hero, four-time Superbowl winner for the Pittsburgh Steelers Barry Shadwell. Roberta perks up on hearing Cleveland discuss Barry at home due to his acting connections. When Cleveland finds out that Barry has a white step-son named Larry, he dreams of trying to hook Roberta and Larry up together. Meanwhile, Barry invites Cleveland to be his partner in the Floaterboat Race. Cleveland is forced to tell his friends he will be Barry's partner instead of working on their boat. 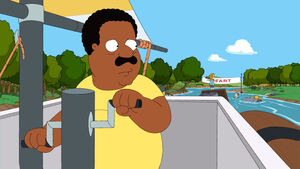 As the race gets started, a wind blows Kendra's Cheeze-Its overboard, causing her to dive after it and upsetting the boat crewed by the rest of Cleveland's friends. The same wind capsizes most of the other boat as well. As Cleveland and Barry struggle to hold their boat together, they are forced into a number of compromising positions, culminating in having to pass a rope between their teeth together. They manage to hold their boat together and win the race. Afterward, Barry agrees that things have gotten just too uncomfortable between the two of them and offers to move. Later at the Stool, Cleveland tries to make up to the guys but is rejected until he offers to share his free beer prize. Cleveland says he has become less interested in beer and starts to act in a stereotypical gay manner until he realizes what he is doing. 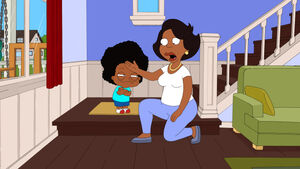 Meanwhile, Rallo becomes too sick to go to school despite his objections. To his growing disappointment, he has to listen to his friends telling of the great day they had at school. Donna tries to keep him connected with a baby monitor but Roberta shuts it off when he expresses interest that Cleveland tried to use her to get closer to Barry.

Retrieved from "https://cleveland.fandom.com/wiki/Ship%27rect?oldid=32630"
Community content is available under CC-BY-SA unless otherwise noted.