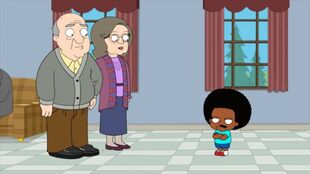 Sex and the Biddy
Rallo discovers a woman is after Murray's money. 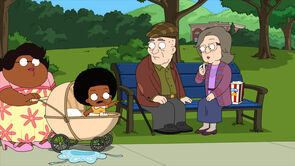 When Murray gets a girlfriend named Hazel, Rallo feels left out. When he finds out that Hazel is holding Murray's money he suspects she is after Murray's money and tries to save him from making a costly mistake. With Cleveland Junior in tow, they spy on Hazel and discover she is indeed working a scam playing another man. However, when Rallo confronts her he is threatened by Hazel who pushes him into a nearby stream. Rallo tries to confront Hazel with Murray but she denies he claims and Murray announces he is getting married. Rallo rounds up her other lovers and tries to stop the wedding but arrives too late when they are sent to the wrong location originally. Immediately after the wedding Hazel has Murray re-committed to the nursing home. While Rallo and Murray commiserate after being taken in, Jr. suggests they get even by making Hazel get committed on her own. They succeed in this by placing cats everywhere until she cracks and goes crazy herself. 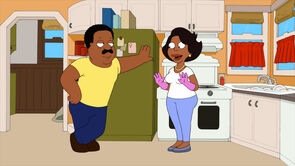 Meanwhile, Cleveland’s eating habits begin to disgust Donna. Donna signs Cleveland up for the gym but he can't stand the workout. While quitting the gym, a stranger offers Cleveland a form-fitting girdle that gives the impression of having worked out and being fit. To keep up the charade, Cleveland fits himself into tighter and tighter girdles despite actually gaining weight. Donna is pleased enough to take Cleveland to superintendent’s dinner party. The dinner proves too much for Cleveland's final girdle which gives way, revealing himself to be fatter than he previously was. With everyone laughing at Cleveland, he comes clean to Donna who also points out her covered-up faults like her wig.and eyelashes. They make up and make out right at the dinner to the superintendent’s amusement.

Previous Episode /// Sex and the Biddy \\\ Next Episode

Retrieved from "https://cleveland.fandom.com/wiki/Sex_and_the_Biddy?oldid=31970"
Community content is available under CC-BY-SA unless otherwise noted.