Seth MacFarlane is an American actor, composer, writer, producer, singer, voice actor and director, best known for his shows Family Guy, American Dad! and The Cleveland Show. He owns production studio Fuzzy Door Productions. He co-created The Cleveland Show with Mike Henry and Richard Appel and voiced Tim from the first season through select episodes of the third season. He left in the middle of the third season to focus on making the live-action film Ted. 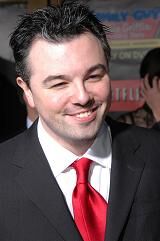 Seth Woodbury MacFarlane was born October 26, 1973, in Kent, Connecticut. He studied animation at Rhode Island School of Design where he met co-executive producer and cast member of Family Guy, Mike Henry, which would ultimately lead to the setting of Family Guy, taking place in the fictional Quahog, Rhode Island. He worked for Hanna-Barbera Productions on shows such as Johnny Bravo and Cow and Chicken. He created two short cartoons that paved the way to Family Guy, that bore a striking resemblance to Family Guy itself, titled The Life of Larry[1], and Larry and Steve[2]. Mad TV recognized his work and helped MacFarlane get into connection with Fox executives. Fox gave him $50,000 to make Family Guy.