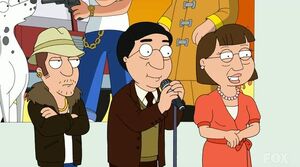 Professor Saul Friedman is the husband of Sarah Friedman and the father of Gabriel Friedman, a.k.a. "Federline Jones". While he seems to be a supportive father, allowing Federline to hold a party promoting his CD at their house, he also disagrees with him on certain subjects and is not against using violence in desperate siuations. Also, despite their loving care towards their son, they seem to despise him, as after hitting him unconcious they began to kick him. He is Jewish and keeps a Menorah in his house.

Angus, Gordy, Saul Friedman and Arch are the other husbands who cross dressed in order to try to turn the tables on the swindler at the mall in "The Way the Cookie Crumbles".

Sarah and Saul bump into Federline and Roberta in "B.M.O.C." as they try to ditch Cleveland at State College where they teach and give them the tour, impressed with the assumption that Roberta convinced Federline to attend college.

Saul teams up with Cleveland Brown Jr. and Rallo to help Federline get his confidence back to win over Roberta in "Brownsized". Saul reveals he was also a black wannabe that went by the name "Jimmy "J.J." Portier" until 1980 but abandoned it after being shot coming out of a Waffle House.

Saul is voiced by Jason Alexander.

Retrieved from "https://cleveland.fandom.com/wiki/Saul_Friedman?oldid=26478"
Community content is available under CC-BY-SA unless otherwise noted.