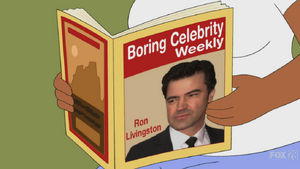 Ronald Joseph "Ron" Livingston (born June 5, 1967) is an American film and television actor. His roles include the film Office Space, the TV show Sex and the City, and the miniseries Band of Brothers.

A photograph of Ron appears on the cover of Donna's magazine "Boring Celebrities Weekly" in "Jesus Walks".

Ron's picture appears a second time on "Boring Celebrities Weekly" in "Here Comes the Bribe" with a sunburst noting he is still on top.

Retrieved from "https://cleveland.fandom.com/wiki/Ron_Livingston?oldid=25787"
Community content is available under CC-BY-SA unless otherwise noted.