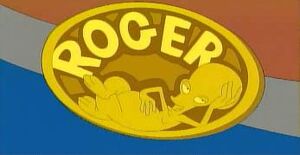 Roger is an extraterrestrial from an unnamed world on American Dad!. He is voiced by Seth MacFarlane, which he based on the vocal patterns of actor Paul Lynde.

Roger appears on the belt buckle worn by Rallo in "Ain't Nothin' But Mutton Bustin'".

in "Jesus Walks", Roger appears on a stained glass window in church during "Tweet with Jesus".

Retrieved from "https://cleveland.fandom.com/wiki/Roger?oldid=31689"
Community content is available under CC-BY-SA unless otherwise noted.