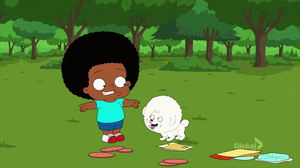 Rock Hudson is a dog that Rallo and Cleveland Jr. try to locate for a $5000 reward from Mr. Waterman in order to buy Donna a new recorder after they break hers in "Hustle 'N' Bros.".

In order to catch the dog, Rallo dresses up Junior in a bologna suit which attracts other dogs, but Rock Hudson actually prefers to play with Rallo. Rallo tries to resist, but soon becomes attached to Rock as well. When Donna threatens Junior's stuffed Larry the Leopard doll, he takes the dog back and Rallo follows, still upset that they have to return the dog. But when they arrive at Mr. Waterman's house, they find that Mr. Waterman really hates the dog and keeps trying to get rid of it and it's his wife that keeps offering the reward to bring it back. When they think they are about to get stiffed, Rallo hits on the idea of getting the reward money in order to keep the dog. As the dog barks, Mr. Waterman grumbles about the blackmail, but pays up and they are able to replace Donna's recorder just before she uses a tablesaw on Larry.

Rock Hudson also appears when the family leaves the house to stay with Dee Dee Tubbs in "A Rodent Like This" when she discovers the Browns have a rat infestation.

Cleveland uses walking Rock Hudson as cover to egg Arianna's house to avenge her insulting Donna in "Who Done Did It?".

When Junior disguises Rallo as a bush in "Crazy Train", Rock Hudson uses the opportunity to urinate on him.

Retrieved from "https://cleveland.fandom.com/wiki/Rock_Hudson_(Dog)?oldid=33174"
Community content is available under CC-BY-SA unless otherwise noted.