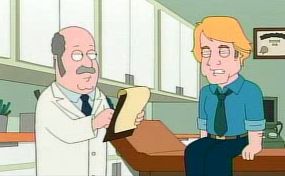 Charles Robert Redford Jr. (born August 18, 1936), better known as Robert Redford, is an American film director, actor, producer, businessman, model, environmentalist, philanthropist, and founder of the Sundance Film Festival. He received two Oscars: one in 1981 for Ordinary People, and one for Lifetime Achievement in 2002.

Roberta sets up a cutaway in "Birth of a Salesman" when she points out the need to stop Cleveland Jr. from his constant cleaning because no one stopped Robert Redford. Robert Redford is shown getting his skin replaced with fried chicken for $10,000.

Redford is voiced by André Sogliuzzo.

Retrieved from "https://cleveland.fandom.com/wiki/Robert_Redford?oldid=24101"
Community content is available under CC-BY-SA unless otherwise noted.